Shootings Since the 2013 Boston Marathon 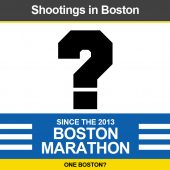 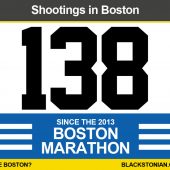 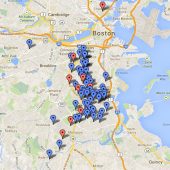 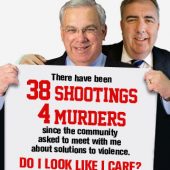 I have been working closely with Blackstonian.com to keep track of all shootings (fatal and non-fatal) that have occurred in Boston since the 2013 Boston Marathon on April 15. With all the media attention and the outpouring of support for victims of the Bombings, we wanted to highlight the daily tragedies that are consistently ignored and whose victims receive nothing, unlike the millions and millions raised in a matter of weeks for the One Fund.

It started with a simple Graphic depicting the number of shootings in the style of a runners number. We have since developed an interactive Google map of where each shooting takes place, showing how they are primarily concentrated in the neighborhoods of Dorchester, Roxbury, Mattapan and the South End / Lower Roxbury. When the number hit the sobering milestone of 100, we held a “Rally for Solutions” on Boston City Hall Plaza and then 47 of us went to the Mayors Office to demand a meeting with the Mayor and Police Commissioner about the violence and the community’s proposed solutions. After receiving no response for weeks to follow up phone calls, letters, messages and tweets, we created another graphic to show how many people had been shot or killed since we asked Mayor Menino and Ed Davis to have a public meeting about violence.

For the most recent count (as of this posting it stands at 138) and map check blackstonian.com.