The culmination of a year’s worth of work for the Blackstonian documenting every shooting in Boston since the 2013 Boston Marathon Bombings. This final report takes the form of a few graphs, the final map, the raw data and a video which shows, in chronological order, all 237 shootings we have confirmed data on, where they took place and how they contributed to the overall count.

Read the final report: 237 Shot in Boston in One Year Since 2013 Boston Marathon – Final Report 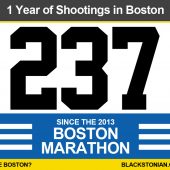 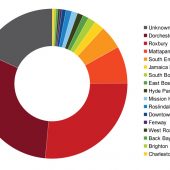 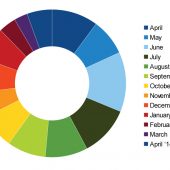 The animation was an incredibly labor intensive and time consuming project. I literally spent days creating each frame in sequence and putting them together. It was also an emotionally intense experience. There were people on this list I knew, friends of mine who were shot or killed over the course of the past year. Realizing each dot represented not just an abstract number, but a person, some of whom are never coming back, all of whose lives, and the lives of those around them are irreparably changed. The music was provided by my Scope / CCR brother EvillDewer and gives the appropriately somber tone for the two and a half or so minutes this video takes. I feel like this is the best way to cap off the project, by simply presenting the information we had gathered for people to see. When we started this count, it was in part a counter-reaction to the attention received by the Marathon Bombing. It was also a continuation of years of work trying to find creative ways to bring attention to an issue which has persisted throughout at least the past 25 years. Initially we were met with some criticism for appearing to callously compare tragedies and reduce lives to a numbers game, however, as time went on, the questions we sought to ask with this project became regarded with the seriousness and gravity they deserved. What makes some violence more unacceptable, more tragic?

It was powerful to see the way our work contributed to changing the nature of the conversation around violence and equity and the value of life in our city and society at large and I am encouraged to continue to try to use design to make critical information like this unavoidable and undeniable. The power of this project is in the information itself; numbers can’t lie. All we need to do is show them.