← Creep’N
Shootings Since the 2013 Boston Marathon → 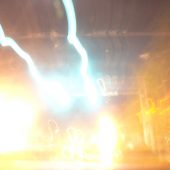 After being recognized by XXL as one of the 15 acts out of Boston to check for, the CCR / Scope Music fam Retrospek followed up with a single aptly titled “Untimely Arrival.” We had been zoning on the idea for a few days before figuring out the cover concept. I kept inarticulately trying to describe  the cover I saw in my head, making wild hand gestures and saying “you know what I mean” a lot. I knew I wanted to play with light motion and color but especially light. We were talking with Byrd and his first words were “something with lots of lights” and I knew that my idea was on the right path, even if I could not find the words to describe it. Then it hit me. Using the camera on Bulb I could keep it open for as long as I wanted, showing lots of lights moving over time. We got in Jero’s Bat-mobile and sped off into the night to get gas one time and I shot the whole way there and back then it was just a matter of selecting and editing the shot. This cover was a lot of fun and pretty easy to execute once we had the idea and I like how the image compliments both the sound and subject matter of the song.